View cart “Magical Egypt 2 Series – Over 30 Films STREAMS” has been added to your cart.

A 5-year research project studying art and architecture in ancient Egypt has uncovered an unexpected revelation that strikes the very foundations of what we believed about the ancient Egyptians. The discovery calls for a radical re-appraisal of both the general intelligence and the degree of scientific sophistication in ancient Egypt and much of the rest of the ancient world. A team of artists discovered an unrecognized visual language – a type of visual cipher – ingeniously hidden in the hieroglyphic reliefs, statuary, and architectural motifs of ancient Egyptian temples and tombs. The ciphers include an impressive array of highly sophisticated and medically accurate schematics of the human brain and nervous system, emphasizing the biological and neurological systems that give rise to consciousness.

We all love Magical Egypt because it goes deep into the subjects we love. Well, now we go even deeper. The companions include additional interviews with our special guest featured in each episode of Magical Egypt 2, and this means that you get to go deeper than ever before. Featuring a special presentation by John Anthony West.

Upon completion of your order, you will receive a login to our “Netflix” type console. Once you login your films are located in “MY LIBRARY.” 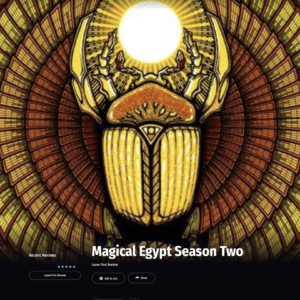