Growing evidence is suggesting a missing chapter in human history. John Anthony West explores evidence of a sophisticated science behind the unexplainable accomplishments of Ancient Egypt. Were they the inheritor of knowledge from an even earlier civilization?

The original run of Magical Egypt, released in late 1999, quickly became a global cult classic. It has not only sparked widespread controversy and debate wherever it has appeared but has served as a catalyst to “awaken” millions to the mysteries of consciousness and to the timeless ancient esoteric technologies that are tightly suppressed by mainstream media.

Bonus get the Digitally Remastered Stream for FREE!

and the Free Gifts

The 6 companion films include the entire interview with our special guests. This means that you get to go deeper than ever before. Including an exclusive lecture by John Anthony West!

Brad Klausen featured in Magical Egypt Series 2 takes us on a deep dive though Sacred Physiology!

Streaming Made Easy and Convenient

Upon completion of your order, you’ll receive a login to our streaming console, making it easy to access your films anytime, anywhere. And with free domestic shipping, you won’t have to wait to start your journey into the magic of Ancient Egypt.  If you do not see instructions please check spam. Email vanese@magicalegypt.com with any issues. 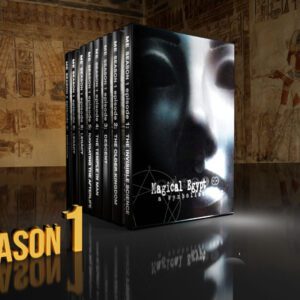